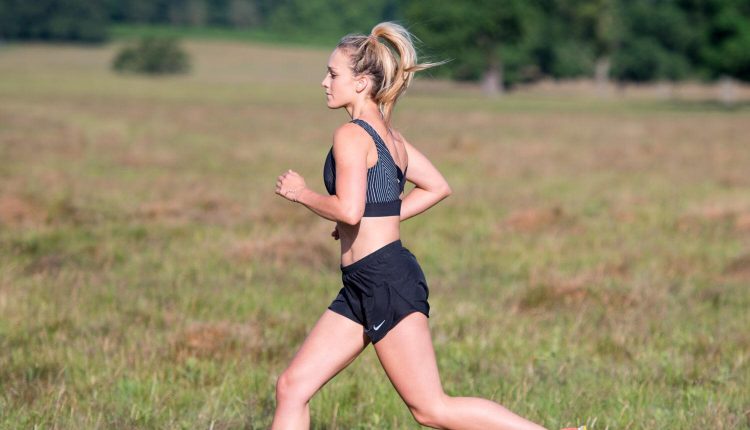 In this article we caught up with mental health warrior Jess Robson who founded the London community running group RunTalkRun following her own mental health battles.

You have talked very openly about your struggles with bulimia, anxiety and depression. How would you describe your current mental health?
I would never say that I was “fully recovered” from bulimia, anxiety and depression because I genuinely believe that once you have experienced a mental health struggle of any sort, it takes a lot of work to manage the difficult thoughts that creep in so you can keep the darker times at bay. I am, however, in the best state of mental health I think I have ever been… since I was like, 5! 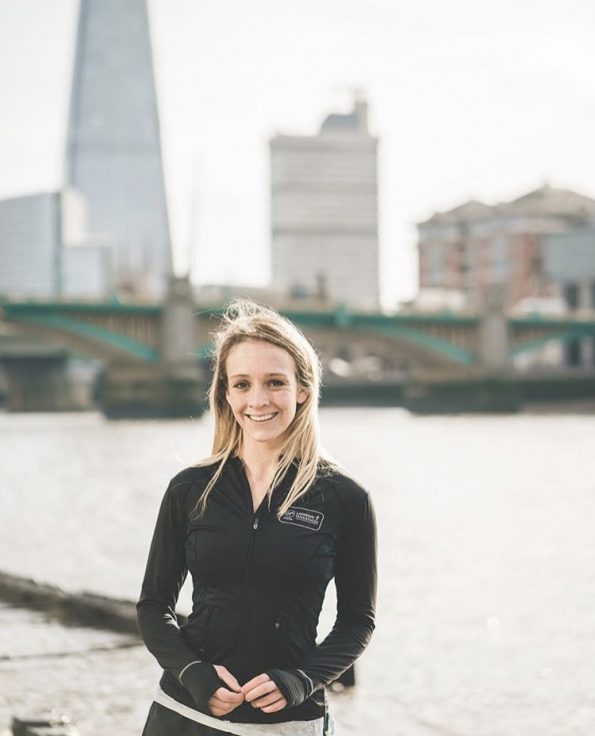 There is a national initiative to improve the stigma around mental health. What gave you the confidence to finally open up to your family and friends and seek help?
I really struggled to open up fully about my feelings until I went for a run with my mum and it all spilled out unintentionally. It was like someone had shaken a can of coke and then opened the tab… Everything came out at once! From that moment onwards I felt such a relief in having shared my experience just once, that sharing it again and again felt natural and almost assisted in my healing in itself. Obviously once my mum and my boyfriend, the two people closest to me, understood what I was going through they urged me to seek help from my GP.

How would you describe your relationship with sport and exercise when you were growing up?
I was a very very shy girl, which made sports/PE at school an absolutely horrendous experience. The only thing I threw myself into was swimming, due to the “independent” nature of it which took away my fear of letting anyone else down, unlike the team sports that were popular at school. I never particularly liked being in the limelight, which had a great deal to do with my social anxiety. I was in constant fear of making a fool of myself or looking incompetent, that declaring myself as being “just not into sport” took away the pressure to get involved.

In your blog, you describe how your bulimia started by the desire to be or to feel skinny. Were you also exercising to try and change your body?
Ironically, the bulimia was kind of a result of not using exercise, initially, and then exercise was what oddly pulled me out of it. I looked at the “skinny sporty girls” at school and compared myself endlessly – I knew that I would never be exercising as much as they did (given my aforementioned disdain for it) so purging my meals felt necessary as a means to keep up. The running was initially born out of a weight management desire as soon as I decided that bulimia just wasn’t sustainable after school, and I wanted some other way to keep the weight low. It was easier to throw myself into it when I was out of school, because I think I was able to stop comparing my athletic abilities to those around me. 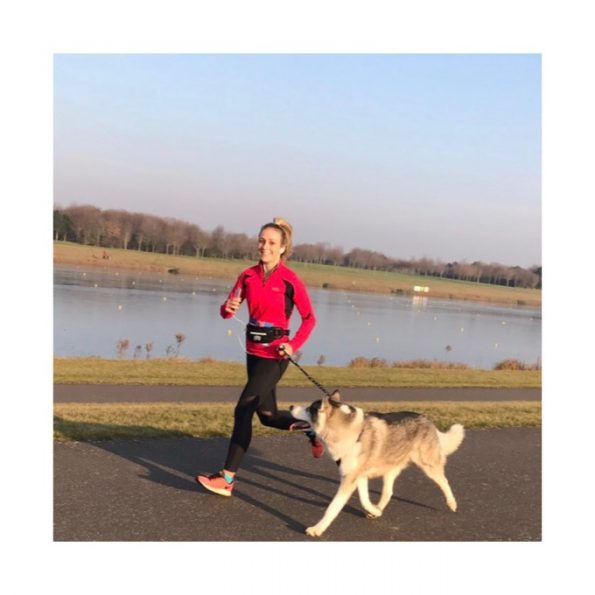 How did running become part of your recovery?
I started running when I moved to Oxford at the age of 19. I knew that I had to make a change and pull myself out of my darkness, and I knew deep down that bulimia wasn’t going to be sustainable forever. I started running to keep my weight low, but it soon transpired that the runs provided much more for me than that.  The runs gave me a new identity that I never really had before… I never really had “a thing”, and I liked it when people started referring to me as “a runner”. I’d found a community. I’ll never again underestimate how important community and belonging is in feeling “needed” in this world. Running also taught me how to sit with my discomfort. Not every run feels great, in fact, some feel bloody terrible – but that’s what it’s like living with depression and anxiety – running gave me the resilience I really needed to be able to sit with that discomfort and not use the self-harm of bulimia as I’d used to.

Why do you believe people are more comfortable opening up whilst being active?
I really believe that running provides the perfect space for us to open up for a number of reasons. Firstly, there are no social boundaries. Secondly, we are displaying our rawest “realest” selves to each other when we run  – we are sweaty, tired, uncomfortable – and already sharing that with another human. When you put yourself in a position to be vulnerable amongst others it encourages us to be vulnerable about other things too. I also see running as a useful form of therapy in that it is a far less intimidating experience than opening up to someone, say, over a dinner table. When you take away the eye contact and the close/intimate surroundings you take away some of the biggest barriers we face in baring all to another person. I think there is also a lot to be said about the fact that we almost lose our inhibitions when we’re running… we’re too tired to put up pretences about who we are and how we’re feeling which often can result in us sharing the reality of what’s going on for us. The list is endless – it is SUCH GOOD THERAPY!

What is your current sporting routine?
I strength train 5 days a week, and run 3-4 times a week. I’d like to squeeze some yoga in there too but there’s only so many hours in a day!

Do you feel you always benefit from a run or are there days where you simply can’t feel the positive impact on your mental health?
I would say that running helps me 7 times out of 10. The remaining 30% is total bullshit “I f*cking hate running” where the legs hurt, the lungs burn, the brain is bored and I just want to go home. But as I mentioned before, it’s those runs that improve our resilience to cope with the stuff that life can throw at us. If running was easy, it wouldn’t be teaching us an important lesson in life.

Do you have days when you can’t face going for a run? How do you cope with that?
There are 3 tips I use when I really can’t be bothered to run. 1, I bargain with myself to just do 10 minutes – usually when I get going I feel fantastic. 2, I take really small steps. I reason with myself to just get into my workout gear at the very least to do some stretching..just wearing my leggings usually brings about the “running feels”, 3, I remind myself how bloody good it is for me.

Do you worry about how you would cope with an injury?
I do worry about this, yes. Having been injured in the past, shin splints are ALWAYS at the back of my mind. Whilst I think I would very much struggle with being injured, I feel more confident in my ability to cope now than perhaps a few years ago.

You describe your project runtalkrun as a “running community committed to supporting each other and being open about mental health”. How did it all start?

I started Run Talk Run in October 2017 between just me and a friend to have a space to have a good moan about all our anxieties and workload stress! We decided that, actually, more people could probably use this space too and as such started to promote the group a little. Turns out people DO need that space!

For a newcomer with mental health issues particularly anxiety, the prospect of running and talking with a group of strangers could seem incredibly daunting. How do you help with that?
Run Talk Run is open to ALL abilities, and I try and make it very clear that we are both non-competitive and not chasing a particular “pace” for the run. The most powerful tip I had in overcoming nerves as a new runner (which I still use all the time) is to pretend that my nerves are actually “excitement”. Being excited and being nervous share a lot of the same physiological responses – sweaty palms, racing heartbeat, anticipation of the future events – and if we tell ourselves that we are excited instead of nervous, it immediately transforms the experience into something positive instead of negative. E.g. instead of “I’m nervous because I don’t think I’m strong enough to run” tell yourself “I am excited to do something that is going to make my mind and body stronger” or  instead of “I am nervous of people seeing me running”, think “I am excited to build on my confidence by putting myself out there”. 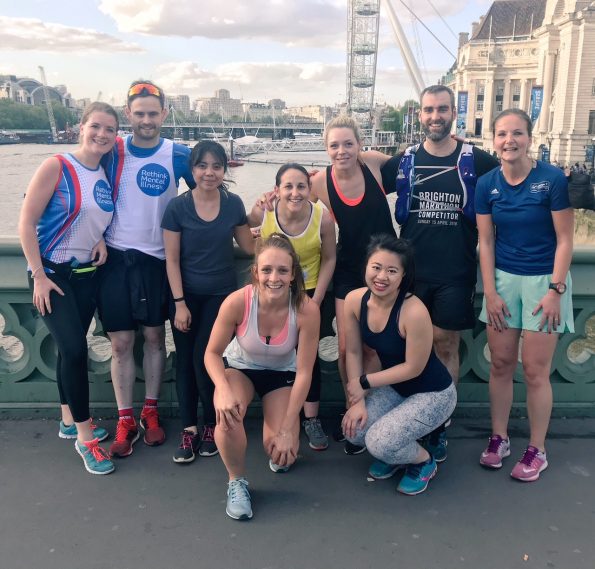 Is the group just for experienced runners?
Absolutely NOT. I want Run Talk Run to be as accessible as possible.

As someone who has suffered from anxiety, how do you deal with the responsibility of leading and actively promoting a running group
I won’t lie, it’s been a huge challenge. I still get incredibly anxious in the hours preceding each run… I still have my social anxiety to contend with and meeting new people is taking that insecurity head on! I think it has really helped me to just “do the thing” that scares me and having such positive feedback from my runners and the feels even I personally get post-run make it so worthwhile.

What has the impact and feedback been from your runners?
I would say the most resounding comment I get from runners post-run is how relaxed Run Talk Run is. They are all surprised at the easy pace, and how I don’t actually push anyone to keep up. That, to me, is so important. The other main bit of feedback is that it is so nice to meet people who “get it”. We don’t ALWAYS talk about our mental health but it’s nice to know that when we do, it will fall upon ears that really understand and care. 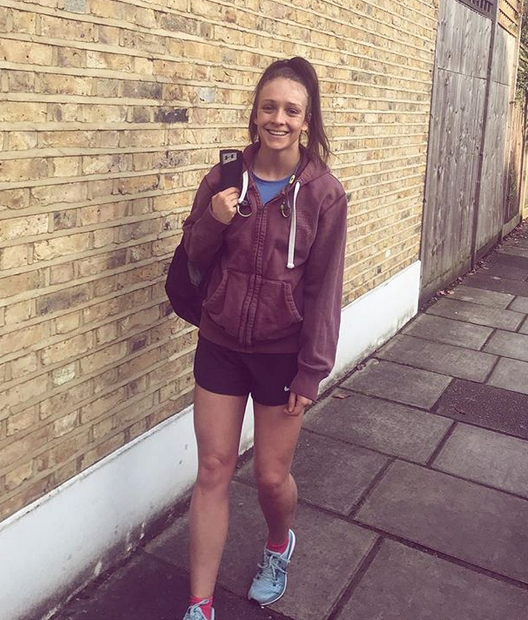 What do you hope the future holds for RunTalkRun?
I would love to see little Run Talk Run communities popping up all over London and beyond! Someone even mentioned a “Lift Talk Lift” for the gym bunnies too haha but we’ll see about that.

Finally, what do you think will be key for you personally, to maintain your mental health?
I think the key for me now is to keep campaigning for the destigmatising of mental health because through actively sharing my story and providing this Run Talk Run space I’ve realised that this is where my passion truly lies. When what you’re doing day-to-day aligns with your values, it’s a lot easier to take care of your mental health because you’re allowing yourself to just “be” who you actually are without false pretence. Running is also going to be a key part of my mental health management moving forwards and making sure I’m keeping involved with the community that I’ve found in runners. Feeling like you “belong” counts for so much.