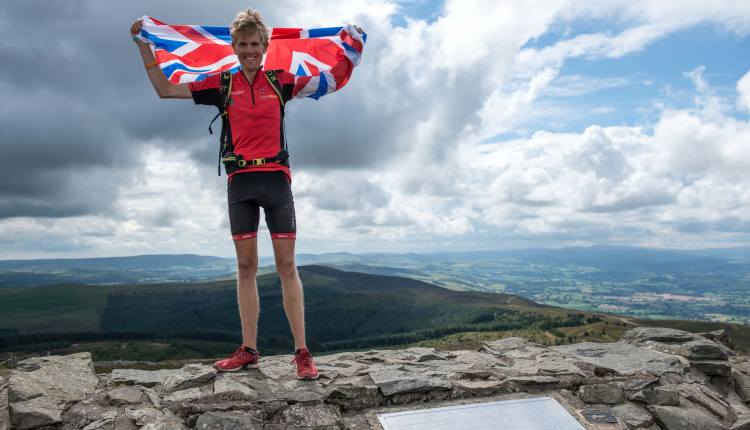 Running For My Reason

I was in paradise: surrounded by the majestic mountains of the Himalayas at Advanced Base Camp on Cho Oyu, the sixth highest peak in the world.

We slept at 5,700 metres altitude with no internet connection, a day’s walk from the nearest road, without our usual daily pressures, and a simple routine where the most tasking decision each day was often choosing which book to read or whether it was too early for another coffee. I had the rare freedom to sit and ponder my existence in the mountains for as long as needed, appreciating the beauty of what really mattered in life. 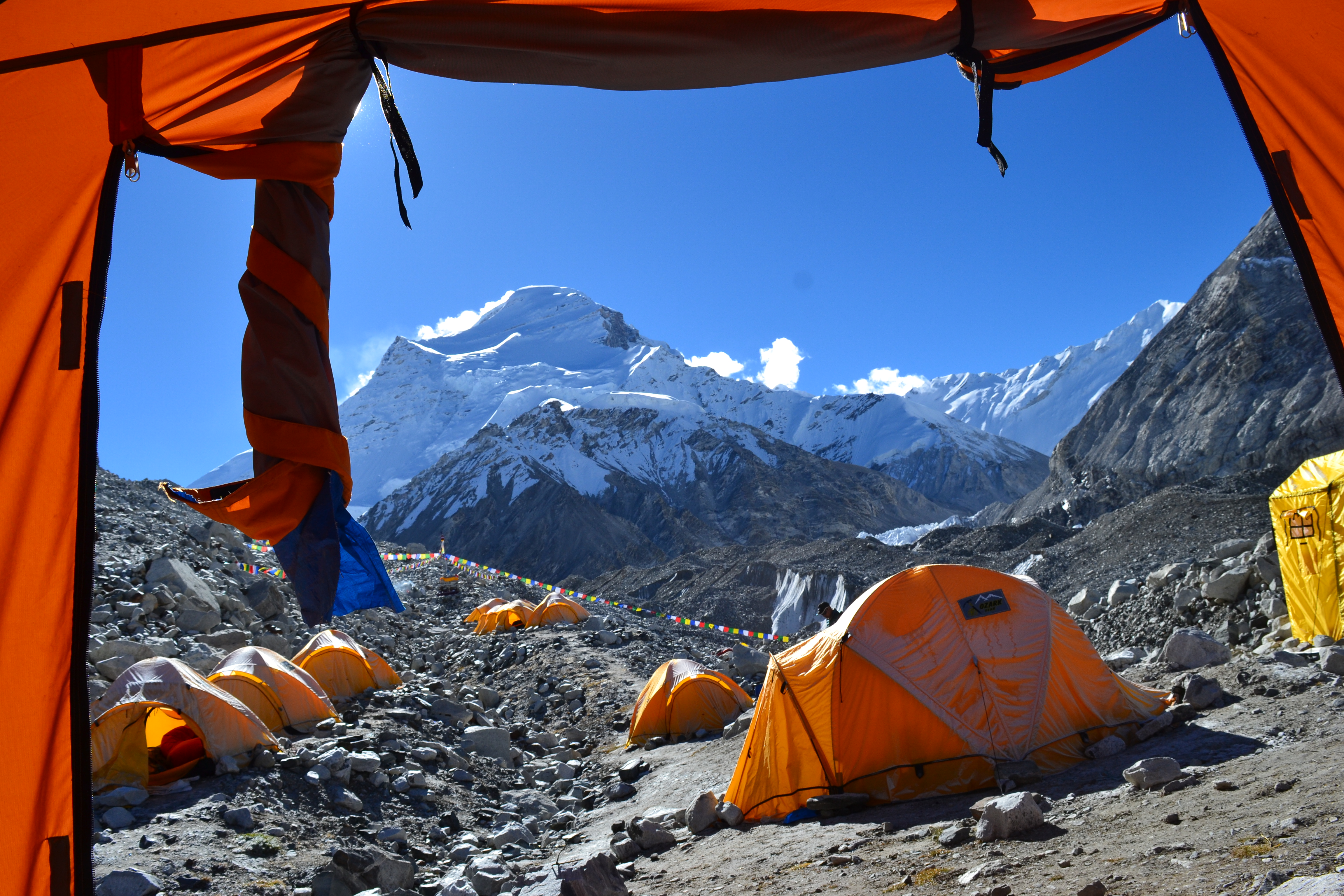 Even when half-way around the world, as far from home and normality as I could imagine, the mental demons had followed me too, with intense urges to binge eat kicking in as I sneaked into the dining tent alone one night.

Being outdoors had always been respite from my eating disorder – the bulimia and binge eating that I had battled since 2012. It all began when a running injury had taken my freedom to run, and the vehicle to achieving my goals. Instead I had fallen into the vicious cycle that took advantage of the self-critical, all-or-nothing nature common in many athletes. Diet became the only thing I could control. Innocently researching sports nutrition caused me to restrict ‘bad’ foods and create a bohemian diet regime that was never going to last. I had no idea that my relationship with food would never be the same again.

Being outdoors had always been respite from my eating disorder

Since childhood I had overcome pretty much everything else life had thrown at me.

A brief bout of epilepsy, stammering, bullying and anxiety had been challenged through outdoor challenges. The bulimia had stumped me – even when the injury had resolved, bulimia hung around. Various therapies and self-help hadn’t worked for long, and the natural peaks and troughs of life regularly sent me to the cupboards to escape these emotions and self-expectations. The binge-eating urges took on a character of their own. I became their dogsbody, left to clear up their mess: uncontrollably binging on cakes, cookies, and a wide-array of sugary junk until forcing myself to throw up. Being able to literally ‘have my cake and eat it’ had come as a revelation. I quickly realised this discovery was trapping me in this cycle even further. 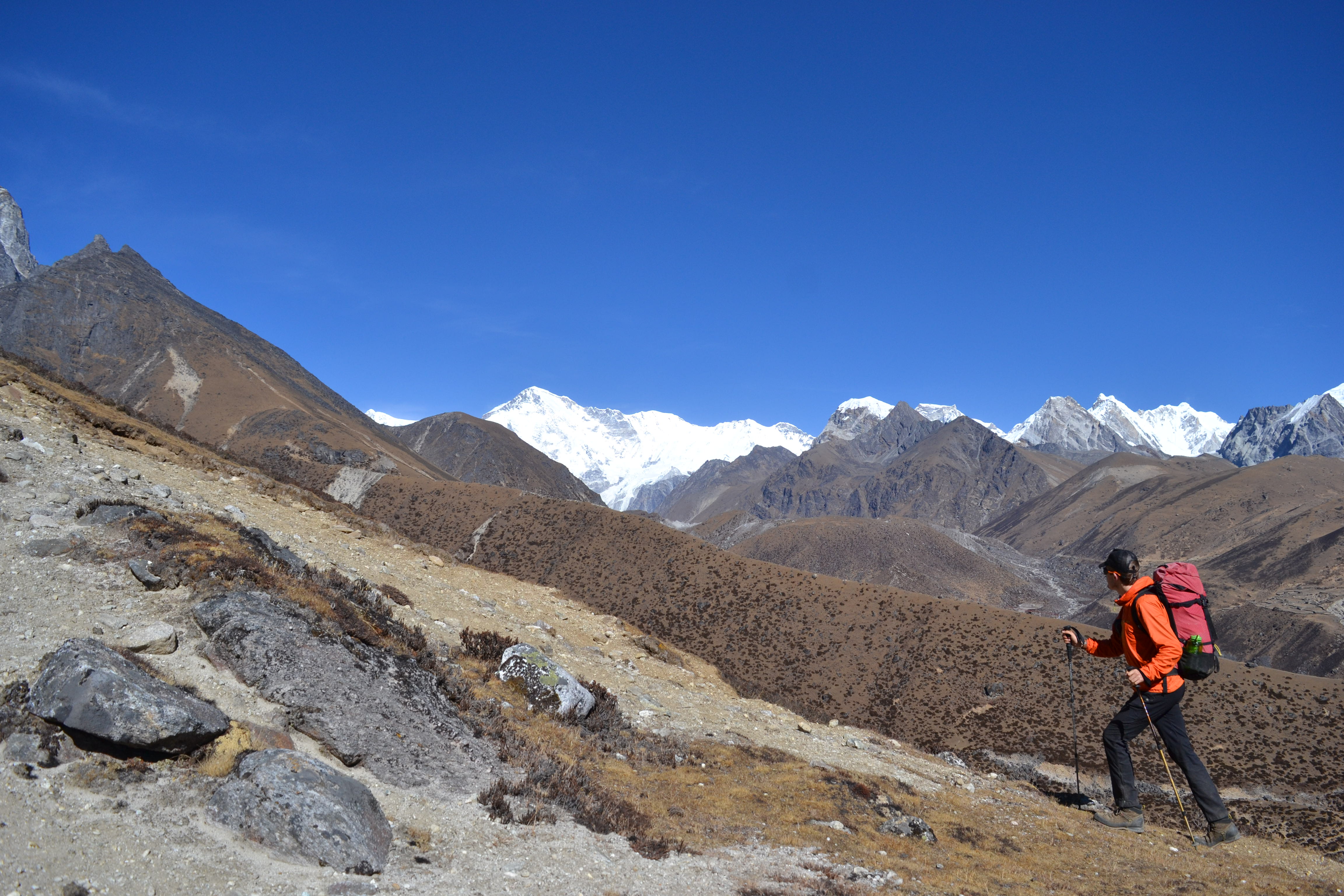 I felt powerless to stop. Considering I had completed a series of outdoor endurance challenges, a lack of mental toughness, determination or perseverance was clearly not the issue. Like anything, I learnt to get on with it, and function with the threat of binge-eating and purging always close by. Exercise and a stringent meal plan, weighing foods to the gram, were my best weapon for maintaining the balance. Running, road cycling and hill-walking played a big part in my life, long before the bulimia began. They were an essential part of training for my attempts to climb Mount Everest in 2014 and 2015, and Cho Oyu in 2016. On those occasions I didn’t run at all – the injury risk was too great with big mountains in mind. The difference was having the choice. Running was just an expression of choice. We don’t always get to choose our challenges, but we do get to choose our response.

Climbing to the highest point of all 100 UK counties, cycling, walking, running and kayaking around 5000 miles in 72 days, raising money for Young Minds UK. Even then, I was plagued by a handful of binge-eating episodes and the same question of: why? With the daily calorie burn of 100+ mile rides and consecutive 12-hour days of endurance exercise in the mountains, these so-called binges were probably nothing abnormal, but a genuine cue from my body demanding more fuel, especially when I had unintentionally lost over a stone in weight in the process. Everything just got labelled and put in the same box.

No matter how far, how high, or how fast I went, I was simply running away from the problem. The problem was never going to change without changing the thinking that created it to begin with and sticking a new label on.

In January I set my first goal of 2018, to finally beat the bulimia.

I began working with a private nutritional therapist to help me through the stages of a self-help book, and it gave a forum to intervene and stay accountable when the bulimia raised its ugly head.

My second goal for 2018 was to run a sub 3-hour marathon. Hitting the bulimia from both angles seemed promising. And of course, you can’t run a marathon without telling everyone. I had completed the distance in steady training runs before and knew endurance was my strong point – put me in a gym with weights, sets and reps and you’d have more luck teaching a goldfish to sing. Only another runner would understand why 3:00:10 would simply not do.

Obviously, food plays a big part in running 26.2. In the build-up to London Marathon each year we see people proudly sharing their carb-loading delights and spaghetti bolognese galore – never mind the plague of articles unhelpfully calculating how many Big Macs we might burn off in the process. As running writer Christopher MacDougall once said, ultra-marathons are just an ‘eating and drinking contest with a little exercise and scenery thrown in”.

Exercise is not about earning food, nor should there be guilt for eating bad foods. Otherwise food and exercise became a punishment.

Like many people, I admittedly enjoy burning calories through exercise and the added flexibility this created with food. Our modern society is already well-invested into this equation. There was no denying that after the long Sunday morning runs, fasted to improve fat-burning ability for endurance (rather than weight loss), I loved the extra treats waiting for me at home without the unreasonable fear of weight gain. My usual ‘bad’ foods of desserts were no longer bad but seen as fuel instead. Sometimes I couldn’t tell whether I was more motivated by being outside or earning my sweet treats guilt-free afterwards. This was the hidden danger. Exercise was not about ‘earning’ food, nor should there be ‘guilt’ for eating ‘bad’ foods. Otherwise, food and exercise became a punishment.

I learnt first-hand how this natural equation could be so badly abused when I picked up another over-use injury in my Achilles tendon. The binge urges hit me too and I slipped up. These ‘troughs’ make the recovery journey what it is. “You can’t help me” I had told my nutritional therapist, feeling defeated and hopeless again. The eating disorder was not only eating for me but speaking for me – desperately shielding itself from being exposed. Surprisingly she took this personally, cut off ties, and left me to deal with it alone. Again. Whilst the therapist left lots to be desired, it brought the realisation that nobody could help me without wanting to help myself first. Her dismissal motivated me even more, just like the bullies at school had motivated me to become something.

There were six weeks of training still to go.

I couldn’t move forward without letting these slip-ups go. The marathon gave that reason to fight back: to get outside and prove myself wrong. It was a positive focus, a reason to feel good, and something to be accountable for. Without training, some days there would be no reason to leave the house, or anything that felt like an achievement. The training plan meant the next hit of endorphins was never far away. I didn’t just run for food – I also loved the buzz of nauseating interval sessions, seeing progress, and the feeling of content that carried through the day. I loved the uncertainty of running six miles at target race pace whilst pondering how on earth I could hold it for an extra twenty. And I appreciated the easy runs on the forest trails just the same. 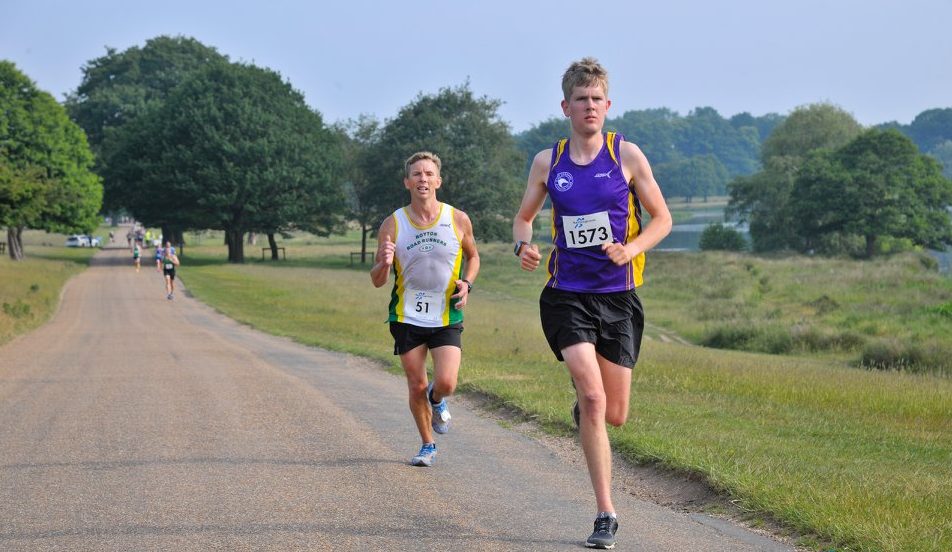 Visualising the finish line in the coming months was far superior to the disgusting, fleeting highs of binge-eating and purging junk food that achieved nothing. I captured this euphoric feeling and could rarely find the need to let the bulimia sabotage it; throwing a bucket of paint over a newly-polished car. The risks of purging combined with the stress of intense training were not to be ignored. I didn’t purge again before race day.

Everything revolved around the training and asking the question: “will this help me run a sub-three marathon?” was usually enough to make a better choice. It was obsessive, in a positive way. The ‘Beast from the East’ hit the UK in the final weekends before tapering began; not that the training plan cared. Covered head-to-toe like a burglar and planning routes to avoid black-iced country lanes, I got the job done – 20 miles, including 10 at race pace – without a treadmill in sight at minus 1 degrees. All the time, it continually disproved the false beliefs these demons drummed into my head.

From the start line, everything went perfectly to plan. At the halfway point I called to my dad on the course that I was bang on target. 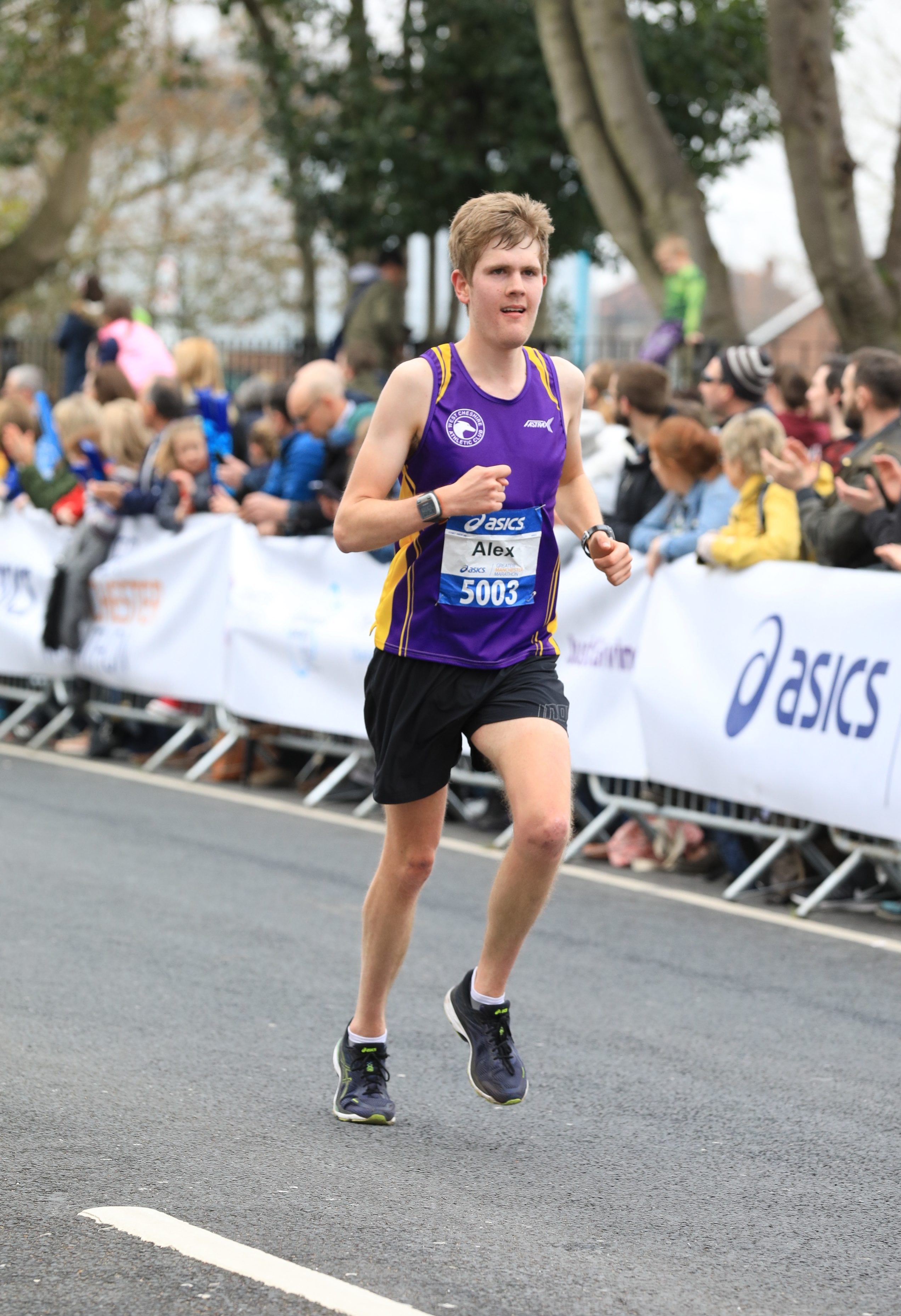 This added momentum. Friends and strangers lining the streets distracted from the gradual increase in discomfort. At mile eighteen, I was anxious when I too might succumb and join those walking at the road-side, seized up like ironing boards with cramp. People often say that marathons start at mile twenty. Luckily, the dreaded wall never came. I took my final energy gel as my legs grew heavy but kept ticking over. Catching up with a running club mate further ahead was a timely boost. All we had left to do was hang on. My average pace was 6:44 – faster than in training – and only got faster. I had played it safe, but let my wheels pull me forward in those final couple of miles; like an eager spaniel tugging at the lead. Soon, the finish arch appeared; the time on the clock became readable. The visualisation that had driven me here was suddenly very real.

Crowds piled up in a wall of noise to both sides. Uncertainty became certainty. There was no need to hold back the emotion; no shame in welling up with relief, and no hiding the beaming Cheshire Cat grin. It was a moment to reflect on the hours spent training alone, the injury setbacks, and most of all, battling against bulimia and its best efforts to trip me up.

I was 375th position. One thing for certain was I had beaten the bulimia by miles.

The marathon had siphoned the fuel that the bulimia used to thrive on and put it to better use. I realised I was the proud owner of a very capable machine that hadn’t let me down; despite the abuse that an eating disorder inflicts. How on earth could I possibly damage an engine capable of achieving these things?

The sub-3 goal became my reason to fight back. I was not cured of bulimia. But if running helped me make the better choice even half of the time, it seemed a pretty good deal to me. I found my reason closer to home than expected, and it started with one mile at a time.

Alex is an adventurer, speaker, author and mental health fundraiser